The Quad Stitch is another slightly more complex stitch, but if you take your time, is fairly easy to do. Think of this stitch as four Square Stitches, arranged in a square, versus a rectangle, as in Brick or SuperBrick. You’ll need four strands of boondoggle for this stitch, each being the SAME length. There are NO long strands used in this stitch. With strands 4-feet long, I can make between 4 and 6-inches of Quad, depending on how tightly I pull the stitches.

RECOMMENDATION: You should know how to do the Square Stitch and Brick Stitch before attempting this stitch. If you have additionally done a SuperBrick Stitch, this is even better, as you’ll have more experience working with this many strands. 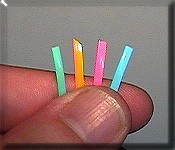 Start with four strands of boondoggle, each cut to the SAME length. I’ll use lime, goldenrod, pink, and baby blue in this example. 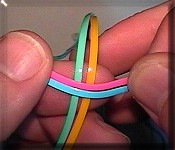 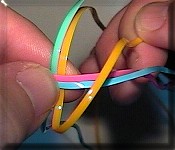 Now, just as you would do for a Square stitch, make a loop with one of the colors… 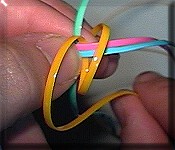 …then make the other loop. This is the start of our first and third Square stitches. 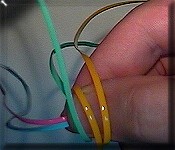 Now continue with the next color and make a third loop…

…and then a fourth loop. This is the start of our second and fourth Square stitches. 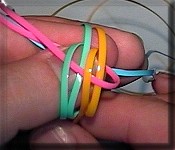 Now for the weaving. Take the top strand on your right, and go OVER the first loop, UNDER the second, OVER the third, and UNDER the fourth, like this… 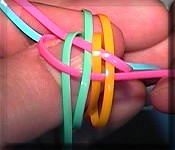 Do the same thing with the other end of the same color. OVER the first loop, UNDER the second, OVER the third, and UNDER the fourth, just like this. We’ve just completed the first and third Square Stitches! 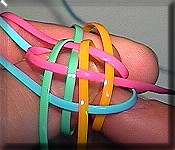 Now do the same thing with your remaining color. Take the strand on your RIGHT, and go OVER the first loop, UNDER the second, OVER the third, and UNDER the last loop, as shown… 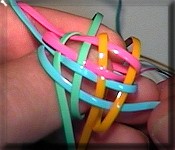 Complete the first Quad Stitch by taking your last strand OVER the first loop, UNDER the second, OVER the third, and UNDER the fourth and final loop. We’ve now just completed the second and fourth Square Stitches! 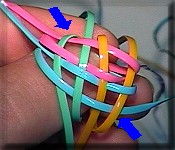 Now take a look at this stitch before you tighten it up. You’ll be able to see how the strands are locked together, preventing them from falling apart on you, as shown by the blue arrows. You should now tighten this first stitch by first pulling one set of strands, like the pink and baby blue, and then pull the other set, the lime and goldenrod. 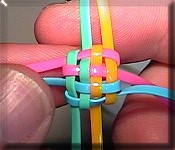 After pulling the strands tight, our first Quad Stitch is complete! Can you see the FOUR Square Stitches that make up the Quad Stitch? (lime/pink, goldenrod/pink, lime/baby blue, and goldenrod/baby blue) 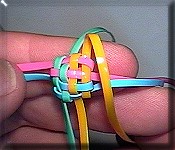 Let’s do one more Quad Stitch. Start by making one loop… 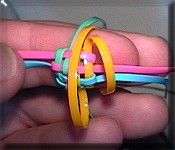 …and then a second… 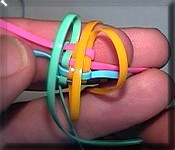 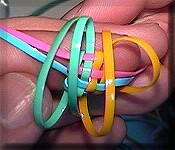 …and finish by making a fourth loop. Note how each loop strand lies directly on top of the same color from the previous stitch. No crossing of strands is done with this stitch, like in the Circle family. 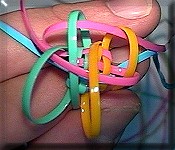 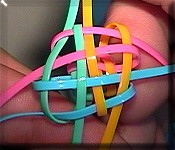 After finishing the weaves needed for the baby-blue strands. Remember that rule of thumb: ALWAYS go OVER the NEAREST loop, then UNDER, OVER, UNDER, etc. 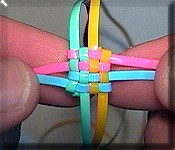 now that the second Quad Stitch is pulled tight, we’re ready to repeat for as long as needed. This stitch gets MUCH, MUCH easier to do after completing 5 or 6 stitches, as you’ll then have some of the Quad Stitch completed, which you can hold onto, while making the four loops. 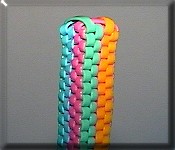 The camera doesn’t quite do this shot justice, as you lose the 3D look of this stitch, but you can get the general idea of what the stitch looks like after completing 3 inches or so. 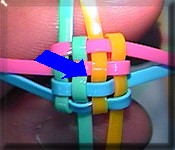 Now to complete this one, I’m going to do something a little different. I want to pass each of the eight strands around the loop next to it, then under and up through the CENTER hole in the stitch. The blue arrow shows you the center hole. 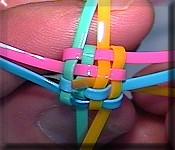 After passing the first of eight strands through this center hole. (The yellow strand I’m passing is the one that exits the stitch at the BOTTOM of this shot. It goes AROUND the baby blue stitch next to it, then UNDER the baby blue and UP THROUGH the center hole.) 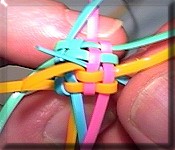 The next strand, the baby blue one, goes AROUND the pink strand next to it, then UNDER the pink and UP through the center hole. Repeat for the remaining six strands. 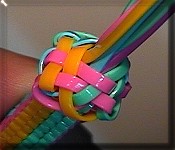 After all eight have been passed through, and just before pulling them all tight. When pulling, do NOT pull all eight strands at the same time, but instead do EACH strand SEPARATELY, starting with the first strand you pushed through… 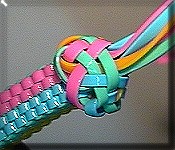 …pulling each strand in sequence, until you have a uniformly tightened the end all the way around.